In the last post, I shared some highlights from our property in March and April of this year, and now it's time to catch up with May and June!

I couldn't have asked for a better start to May than this close-up view of a male Chestnut-sided Warbler (I love these birds!) who was foraging and singing in the back corner of our meadow on May 2: 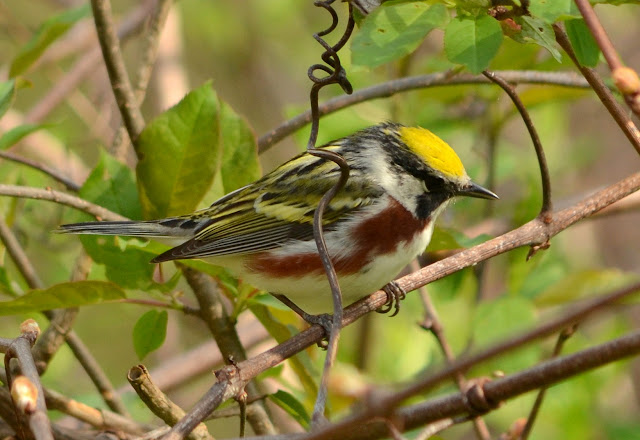 Swelling apple blossoms made a pretty stage for this Song Sparrow on May 10: 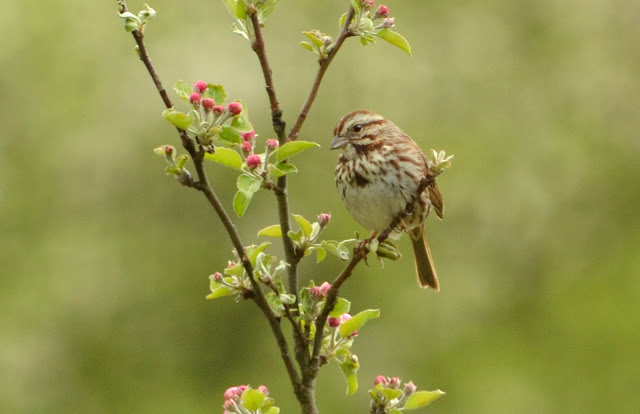 Eastern Phoebes started this season the same way as last year, with a successful nest in the rafters of an old, barely-weather-proof shed on our property. The phoebes' first egg appeared on April 30, and the five babies fledged by June 7. (I don't have any pictures of that brood to share, because the light in that shed is so poor.) Hooray for more phoebes in the world! Meanwhile, an American Robin built her nest just outside the same shed, on top of a broken picnic table we had leaned up against the shed wall. Here's the robin on her neat mud-rimmed nest on May 13: 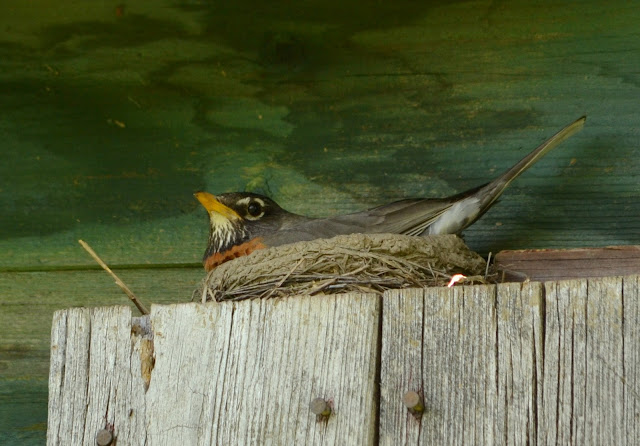 Robin babies aren't exactly pretty! Here are the little monsters on May 20: 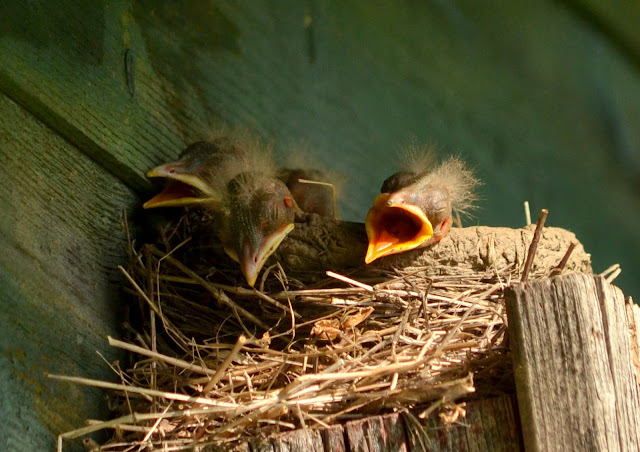 By May 26, the young robins were covered with mottled feathers and looking just about ready to leave the nest. How nice of a parent to pose here for a family portrait: 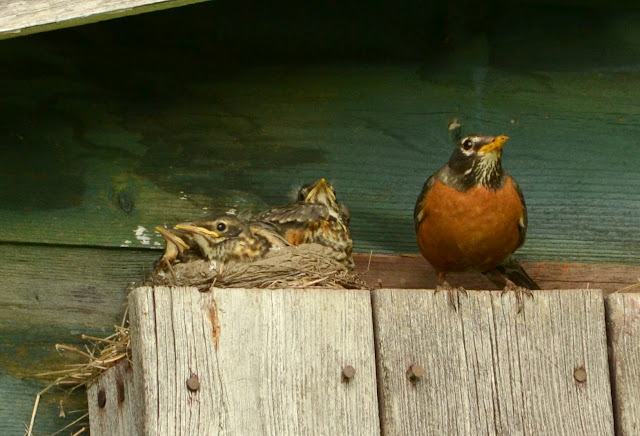 I was careful to give these robins plenty of space, but as I walked into the meadow to avoid the very alert robins, I nearly stepped on a Song Sparrow's nest on the ground! I never would have seen the hidden nest if the adult sparrow hadn't rocketed up suddenly when I got close. I took a quick picture of the lovely speckled eggs (as best as I could get without touching the surrounding plants), and then I moved on.... I have no idea how this nest fared after our close encounter. And then a week or two later, I accidentally startled another Song Sparrow from her nest in the opposite end of the meadow. I've learned that I need to avoid straying from the paths in the meadow as much as possible during nesting season! In any case, here's a glimpse of the first Song Sparrow nest from May 26: 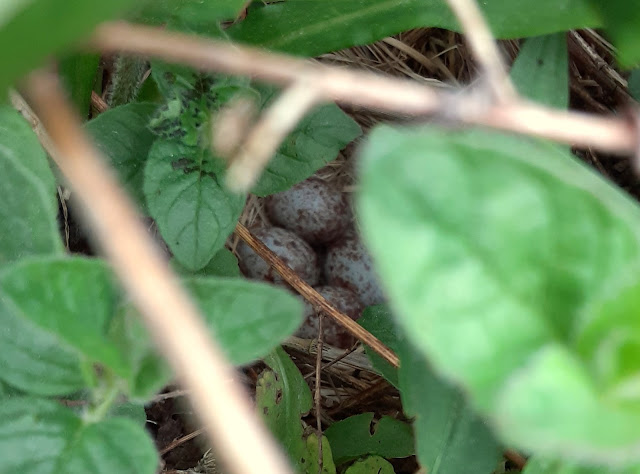 This Gray Catbird was putting on quite a concert on the edge of our meadow on May 13 -- I absolutely love this bird's pose with his fluffed-out butt: 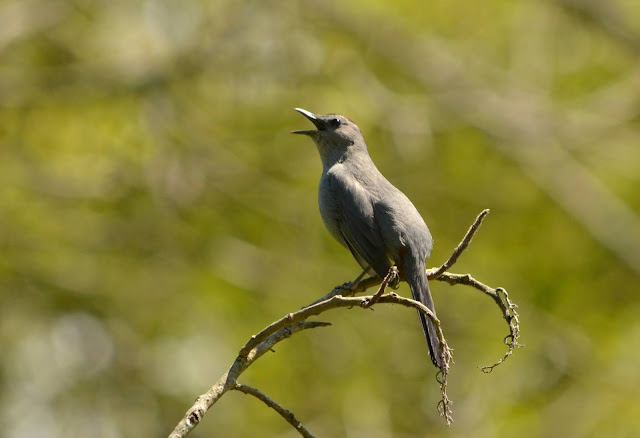 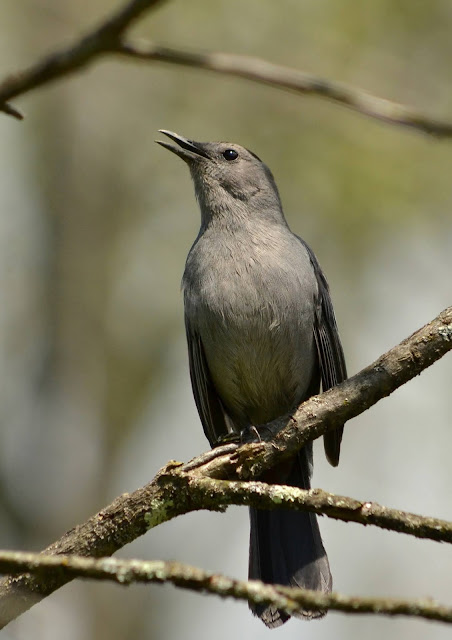 The same as last year, we have a family of House Wrens and a family of Tree Swallows in our two nest boxes (although the birds swapped boxes compared to last year). Here's the male House Wren on May 13, bringing a spider egg sac into the box that he'd already stuffed full of twigs and egg sacs (that's a stick overflowing out of the entrance hole): 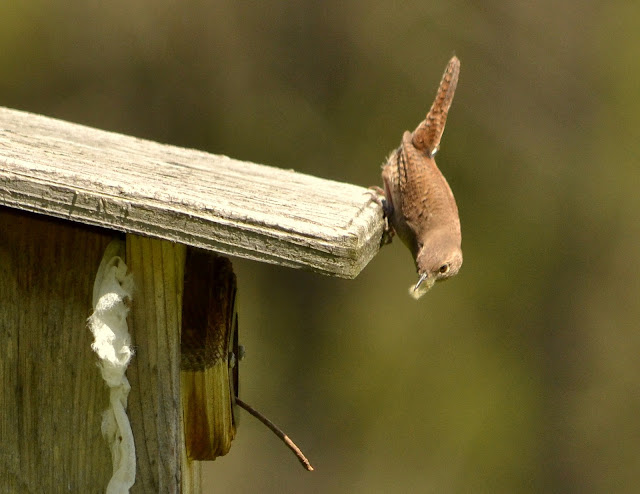 The House Wrens' nest must have been somewhere deep inside all those twigs, because I heard noisy babies eventually, but I was never able to actually see the eggs or chicks. I'm pretty sure the brood has fledged by now, but the adults are still visiting the box (perhaps gearing up for brood #2?). 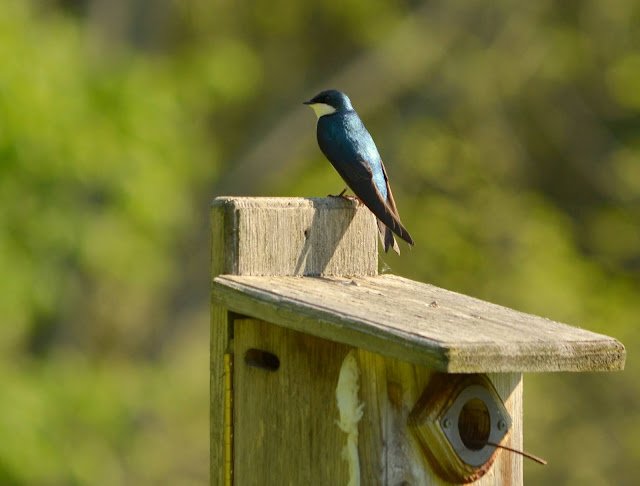 At the same time, the female Tree Swallow gathered bits of grass for their nest; it was strange to see a swallow perched on the ground, but very cool to get to see this lady at work: 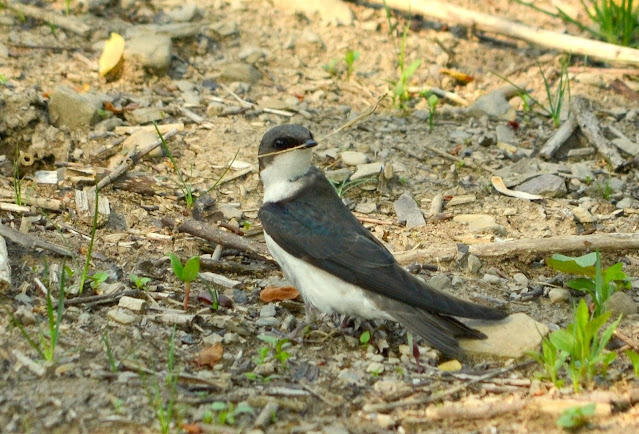 The finished Tree Swallow nest was perfectly padded with a variety of feathers. Here are the eggs in their nest on June 13: 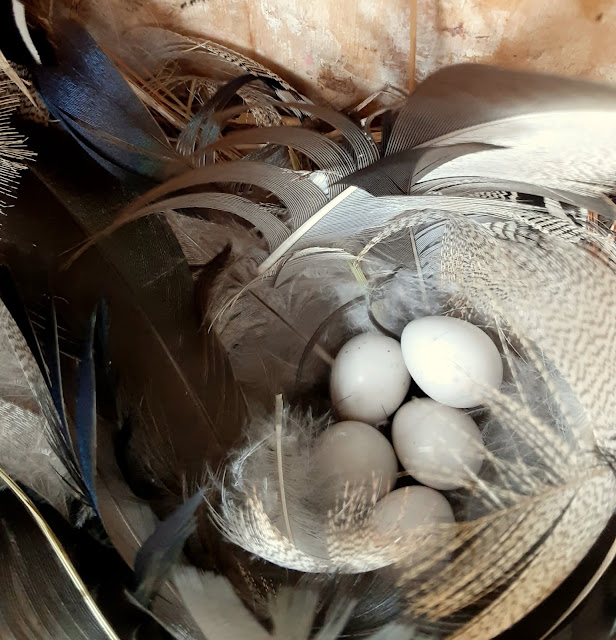 And the very next day, the eggs had turned into a batch of tiny, brand new swallows: 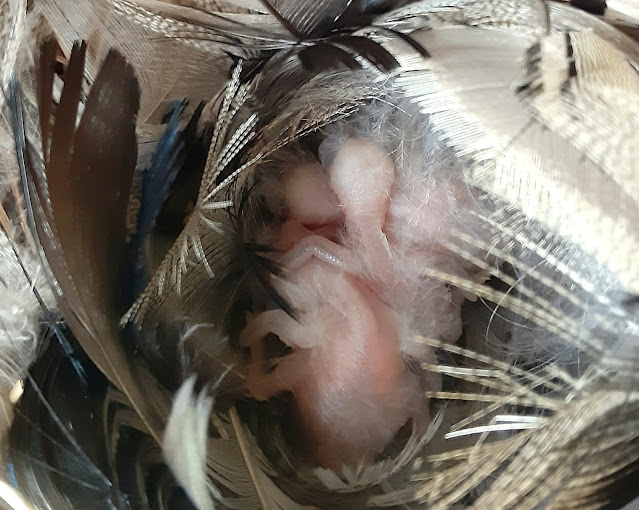 I saw the nestlings peering out of the nest box hole today, which means the whole swallow family will probably leave us soon. The female Tree Swallow has gotten especially defensive in the past few days, and she's been dive-bombing me when she sees me in the garden or meadow. I will very much miss having the Tree Swallows as a constant feature in the yard, but I suppose it will be nice to not have a bird occasionally swooping angrily past my head.

Indigo Buntings are likely nesting somewhere around here, because I hear a male singing fairly frequently. Here's a male Indigo Bunting (here to stay, or passing through?) surrounded by apple blossoms on May 18: 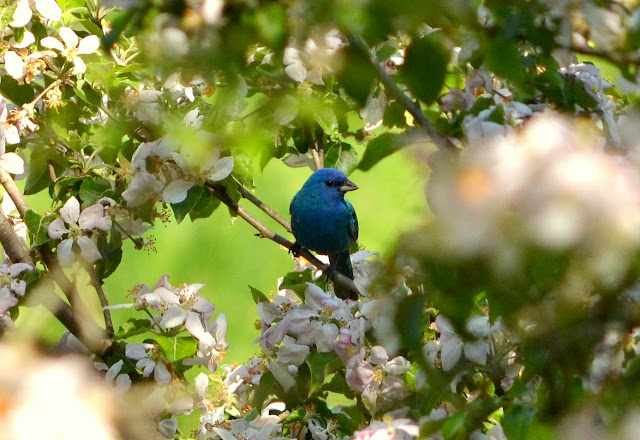 On May 20, I was surprised and thrilled to see a female Hooded Warbler adding large dried leaves onto a nest right near the path in our woods: 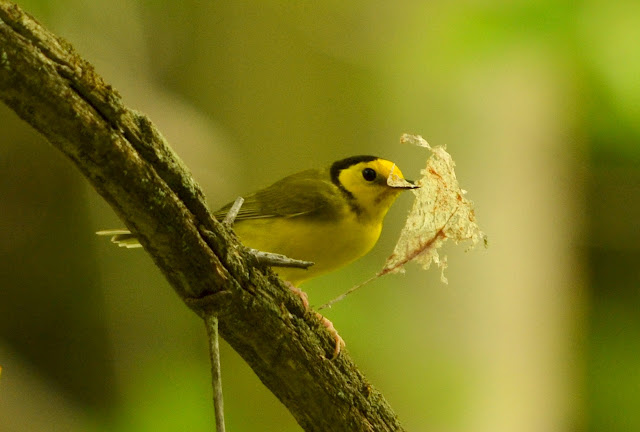 Here's the leaf-covered nest, set in a low Multiflora Rose bush -- I never did see eggs or other activity in this nest, so I suppose this placement didn't work out, but it was still very cool to see this delicate nest-building process, and to have proof that Hooded Warblers breed in our woods: 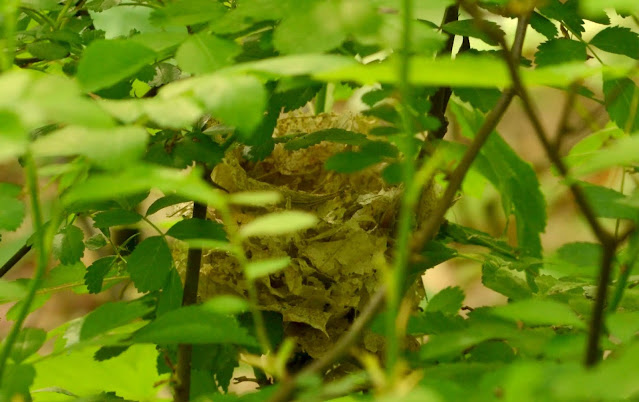 Our woods were practically dripping with Veeries this spring! I hear and see these lovely thrushes in our woods every year, but they have seemed to be especially numerous this year, with multiple birds singing and calling nearly constantly. Fantastically, the fallen log that our trail camera was watching happened to be something of a Veery stage in late May: the camera captured multiple videos of a male Veery perched on the log and singing, and two nearly identical videos (on different days) of Veeries mating! Here's a compiled video with (1) a Veery singing, (2) Veeries mating, (3) a very wobbly baby White-tailed Deer and its mom (oops, sorry about the typo in the video), and (4) an Ovenbird (often heard in our woods but rarely seen) walking along the log:

May was a wonderful time for flowers (of course), and here are a few highlights from May 20 and 21. Here's Red Baneberry (Actaea rubra), a new plant for me, whose flowers appeared along our woods path (the later red berries on this plant helped me confirm this ID and distinguish it from White Baneberry, which also grows in our woods): 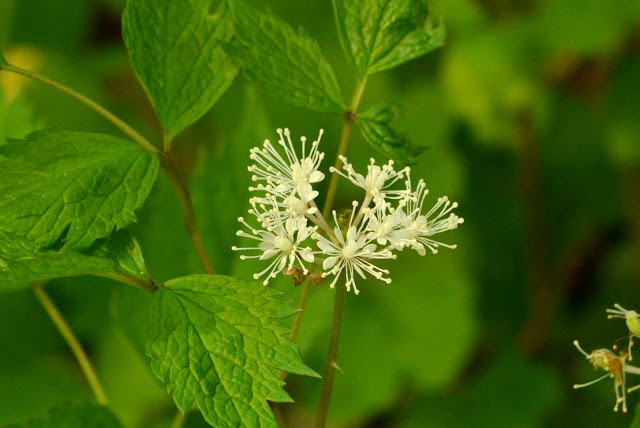 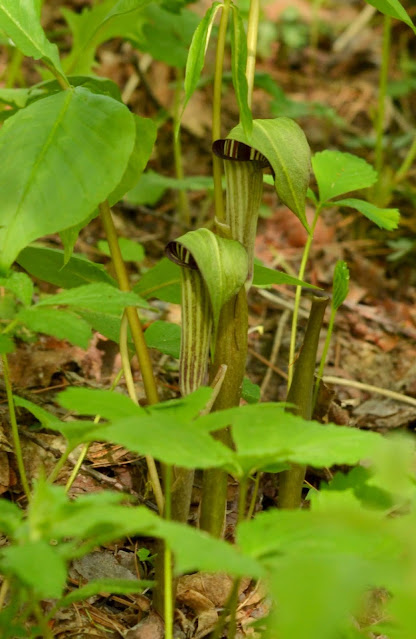 And a perfect Starflower bloom, lit up by some sunlight: 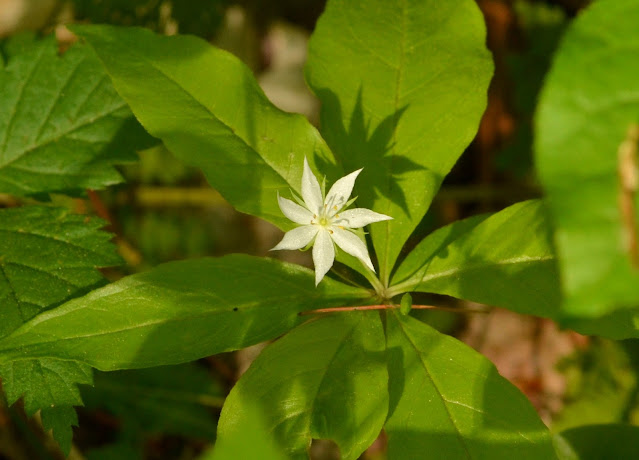 And I was so happy to see this thriving patch of Foamflower in our front yard: 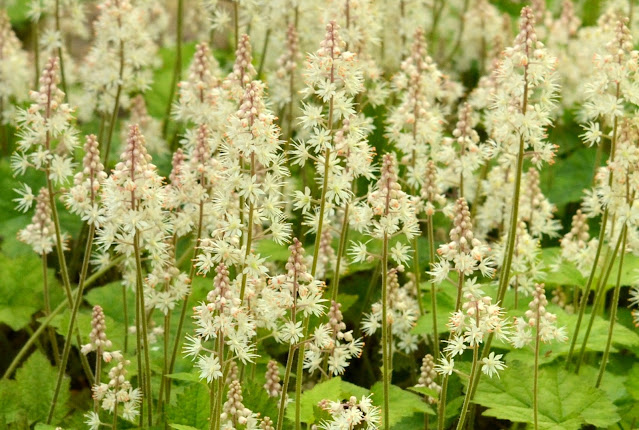 On June 4, a somewhat tattered but still beautiful female Promethea Moth appeared on our deck: 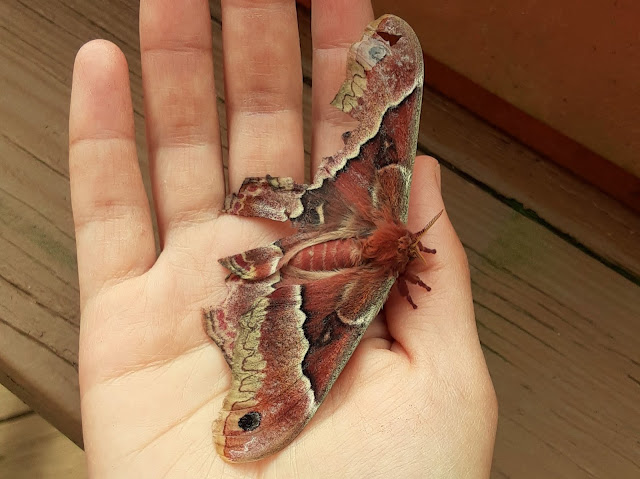 On the morning of June 8, the Spicebush Swallowtail chrysalis that I kept over the winter in our unheated mudroom turned into a butterfly! I had neglected to give the creature a suitable perch in its enclosure (I know better now), so I provided myself as a perch and kept watch over this new and very damp butterfly while it worked on expanding its wings: 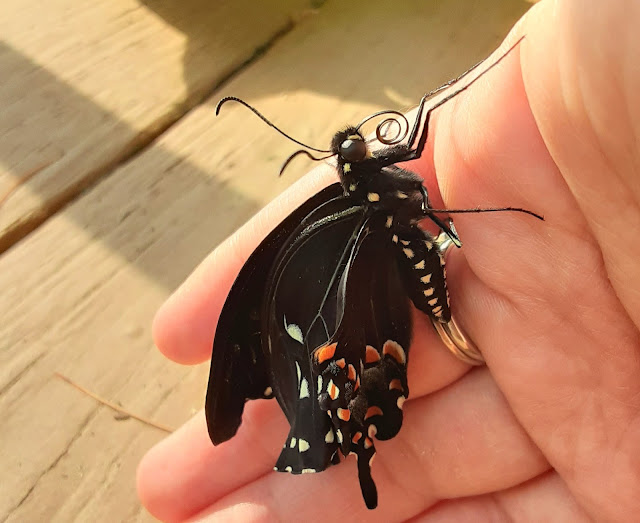 After about 20 minutes, it was looking pristine and perfect. Soon after this next picture was taken, I transferred the butterfly to a sheltered leaf to finish drying off, and it stayed there for a while and then presumably left when it was ready: 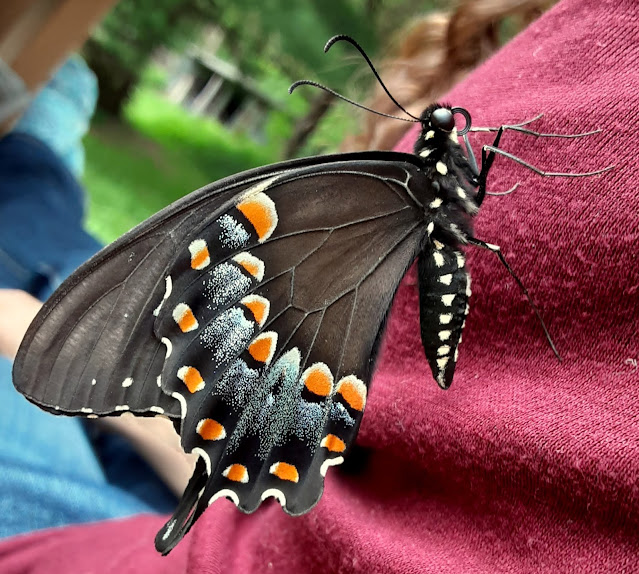 Also on June 8, the largest Brown Snake (Storeria dekayi) I've seen (they're not a very big species) got stuck while trying to fit through the small mesh fence around my garden; I pulled it backward to free it, and then I got to marvel at how soft and docile this lovely creature was: 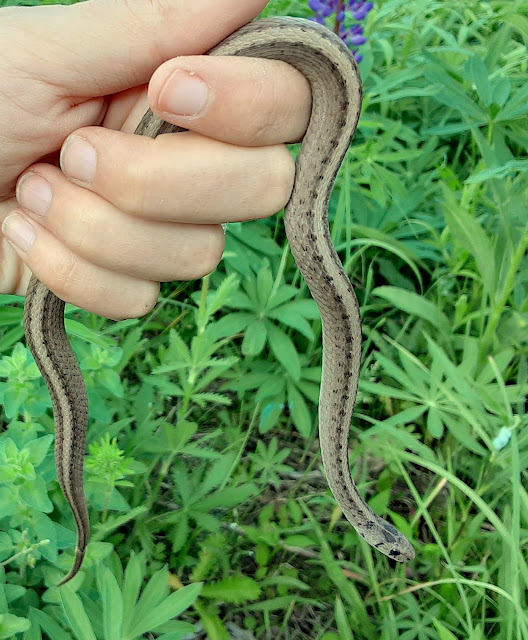 This Red Eft (a juvenile Red-spotted Newt) was super photogenic in our yard on June 21: 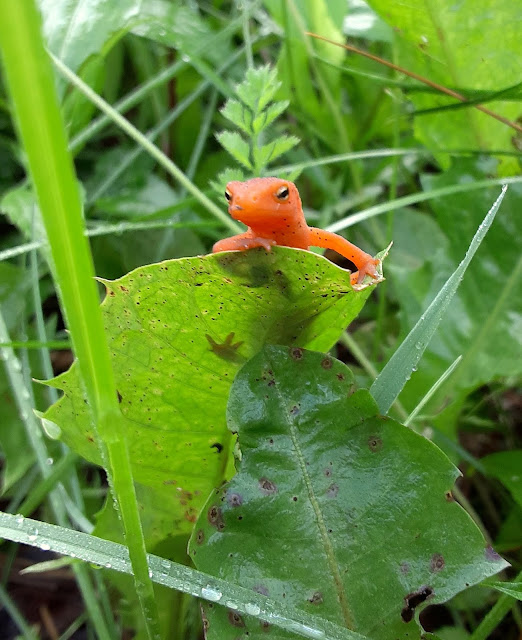 And finally (back to nesting birds again), the Eastern Phoebes are currently well into their second brood in their traditional nesting spot over our front door. I really love having these birds as neighbors, and I'm so glad they decided to nest in this spot again. Here are the eggs in their moss-and-grass nest on June 25: 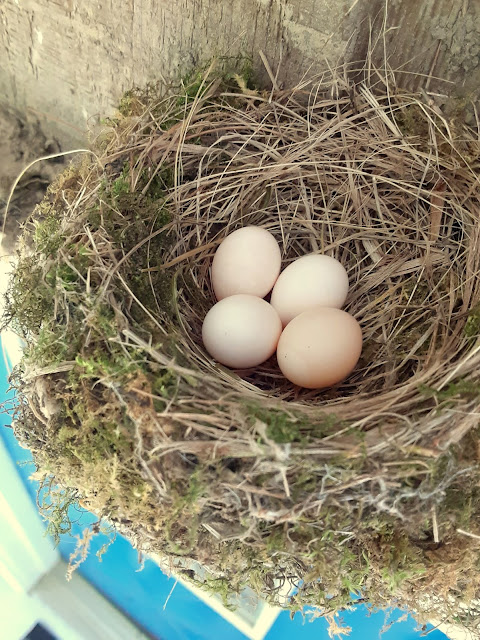 Here's to a wonderful spring and beginning of summer!

Posted by Elizabeth at 8:08 PM