OK, I'm being a little optimistic here. We still have a substantial layer of snow covering the ground (which has been the case for at least the past two months), but that snow is getting slushy, and we're starting to get the year's first well-above-freezing temperatures. The 50 and 60 degree F temperatures predicted this week seem practically impossible after months of frozen landscapes, but here we are!

Before the winter's accumulated snow melts away, and before spring really starts to peek in, I'll say goodbye to deep winter by sharing some sights from these first frozen months of 2021.

The cold weather made for some really beautiful and interesting landscapes this winter. On January 8, a layer of frost appeared only on the topmost portion of the ridge visible from our house, as if deposited by low clouds: 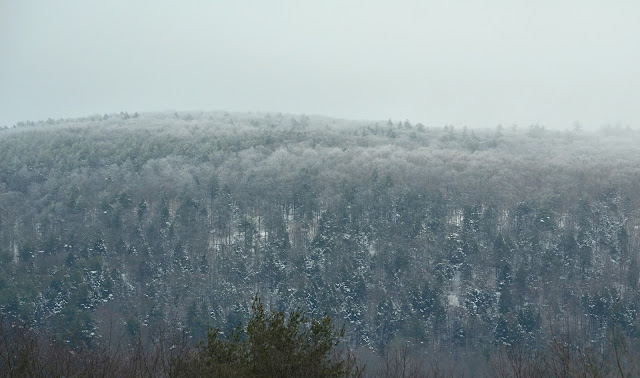 On February 26, some combination of melt, freeze, fresh snow, and winds produced these intricate lines across the surface of our meadow: 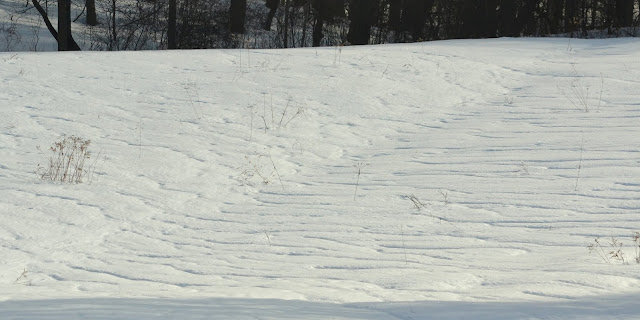 In our woods and meadow, winter plants have made for similarly stark and interesting views. I'm always struck by these Black Cherry trees (wrapped in Virginia Creeper vines) that grow on the edge of our woods, and on this January 22 afternoon, it seemed to me that the gray winter sky was a river between these trees' reaching branches: 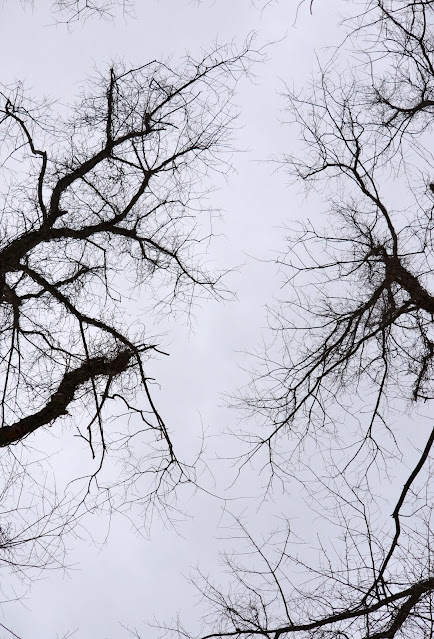 These seedheads of Virgin's Bower (Clematis virginiana) are one of the few soft things in this landscape, and they were lit up by a rare bit of sunlight on January 9: 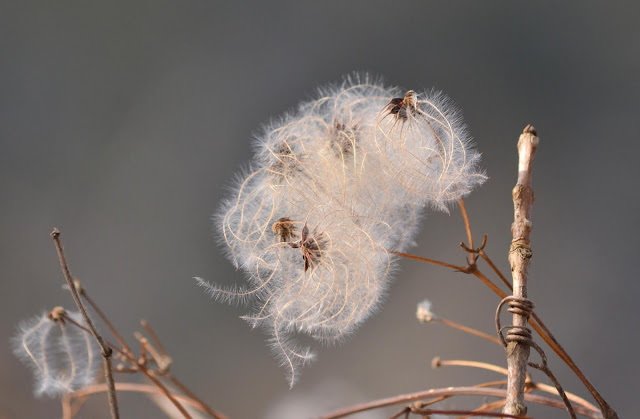 We've been happy to see our familiar animal neighbors this winter -- and some surprising visitors, too! We've kept our feeders well stocked with sunflower and niger seeds and suet, and the birds have certainly made good use of our offerings! Here's an American Goldfinch on January 9 (with blue sky!): 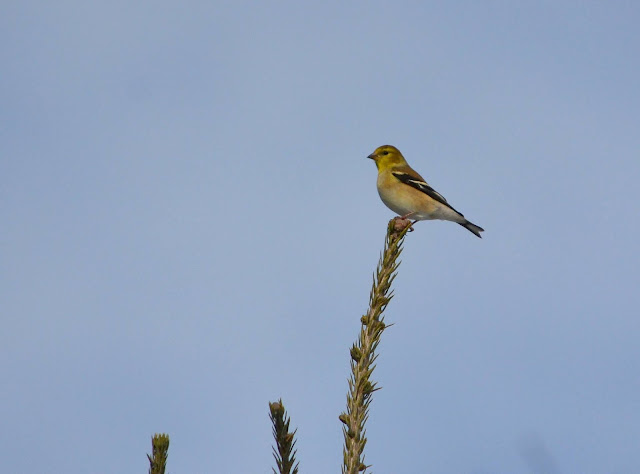 This handsome House Finch was checking out the snowy roof just outside one of our windows on January 22: 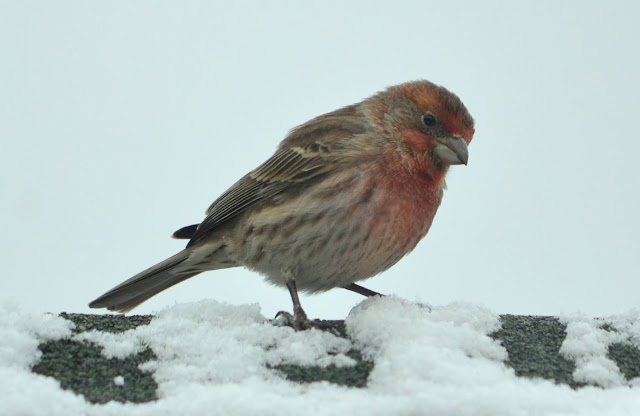 I love seeing Blue Jays add their fancy costumes to otherwise bare winter scenery (this picture is also from January 22): 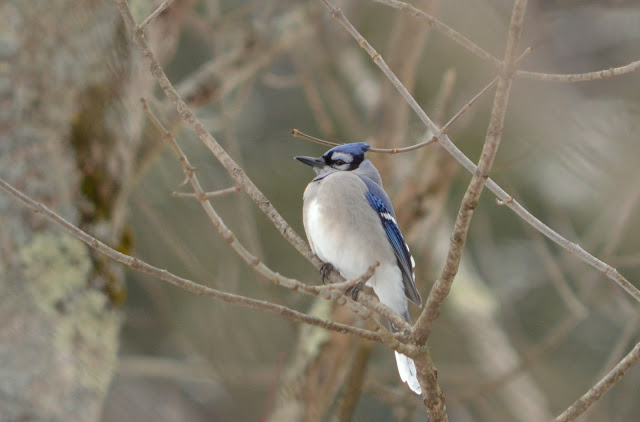 When the snow got deeper, the Red Squirrels started making tunnels to get to the feeders. Here's one of these industrious creatures popping out of its tunnel on January 29: 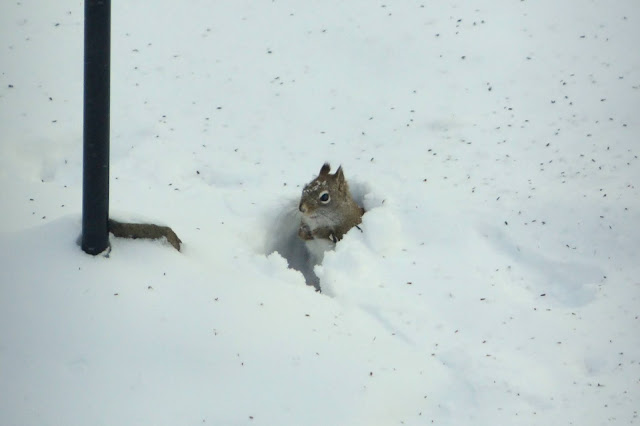 This flock of Mourning Doves spent some time resting in one of our trees on February 5: 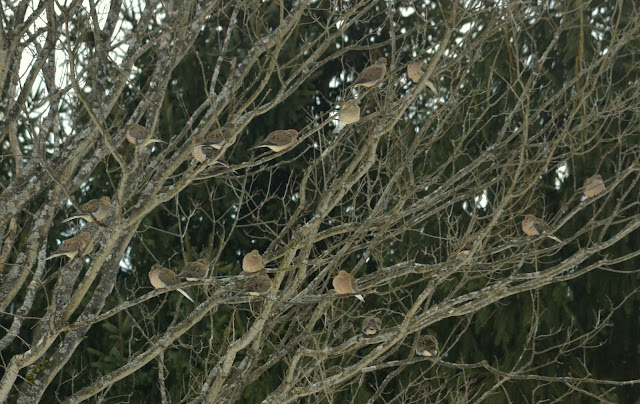 On February 22, I watched our three most common woodpeckers -- one individual of each species -- cling motionless to the branches of an apple tree near our house while a bitterly cold wind and snow blew in. The three woodpeckers were each hunkered down on the same side of their given branch, getting some protection from the wind. Here's the Downy Woodpecker (a male): 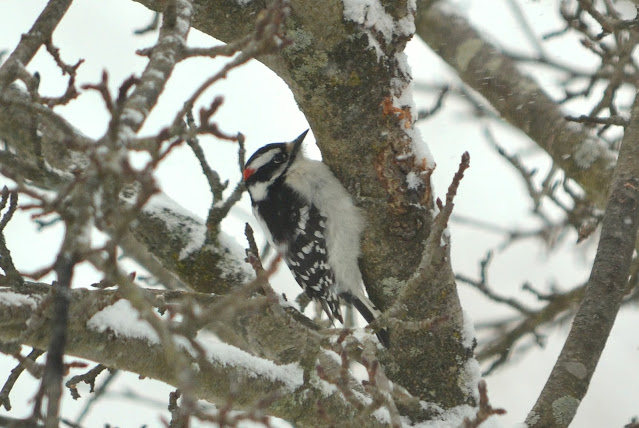 The larger Hairy Woodpecker (a female): 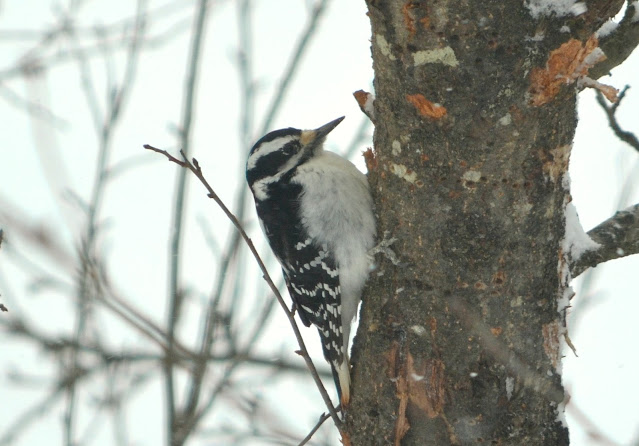 And the Red-bellied Woodpecker (a female): 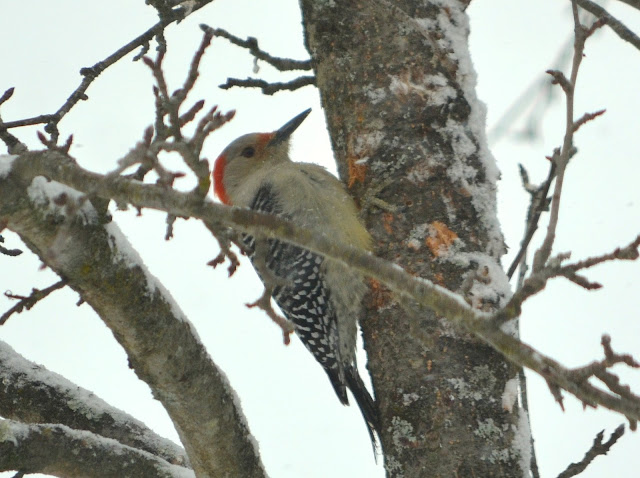 This winter has brought two species of birds to our yard that have been rare visitors to our property in past years, but this year they've become regulars! Red-breasted Nuthatches are not especially uncommon in this general geographic area, but I'd only seen one of these birds in our yard once before, in April 2018.... But then this winter I've seen one or two Red-breasted Nuthatches every week since mid-November. I love these dainty little birds! They work over trees in our woods, and more recently they've been snatching sunflower seeds from our feeders. None of these birds has given me a great opportunity for a picture, so here's the best I've been able to manage (on February 19): 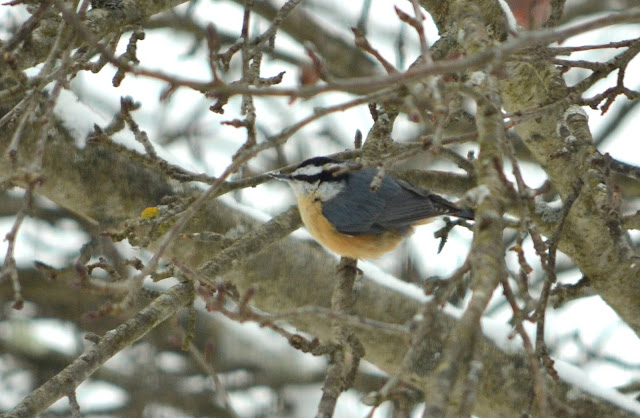 And then there's Common Redpolls! Again, I'd only seen one of these birds in our yard once before, in December 2018, but -- incredibly -- we've had up to three Common Redpolls at once visiting our feeders every week since early February! Here's one of these fancy northern finches on February 18: 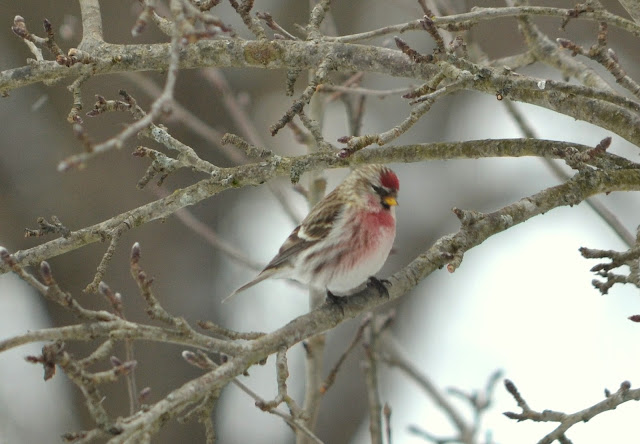 The birds are starting to gear up for spring. Male Northern Cardinals started to sing from the tops of trees back in February, and Black-capped Chickadees, Tufted Titmice, and Dark-eyed Juncos have since joined in. Here's a cardinal taking the stage to sing on March 3: 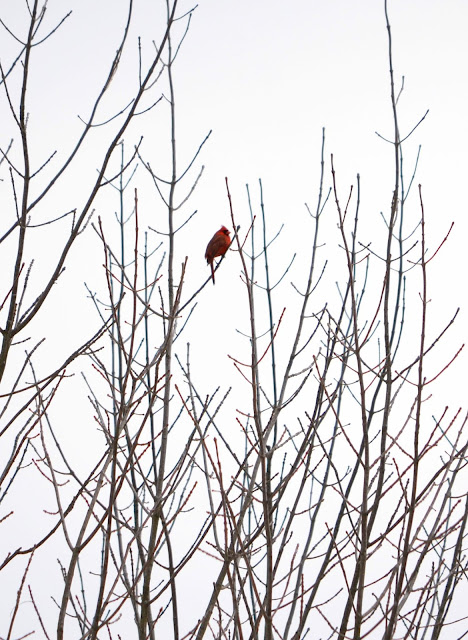 With the warm temperatures this week, it's going to be hard to keep me inside! I love each season, and I'm ready for the change -- goodbye, winter!

Posted by Elizabeth at 7:42 PM