February is undoubtedly a winter month around here, but then March starts to bring the first hints of movement and growth, and now we're inching gradually toward spring. (It's coming!) I love getting to witness these scattered signs of the changing seasons. I have several sights to share from our home over the past month or so, and I'll start back in wintry February.

On February 21, I wandered into our woods in the afternoon sun and ended up admiring some little living things that I would probably overlook in other seasons. This fallen branch had quite a pretty collection of lichen (I'm guessing the bright yellow one is Common Sunburst Lichen, Xanthoria parietina): 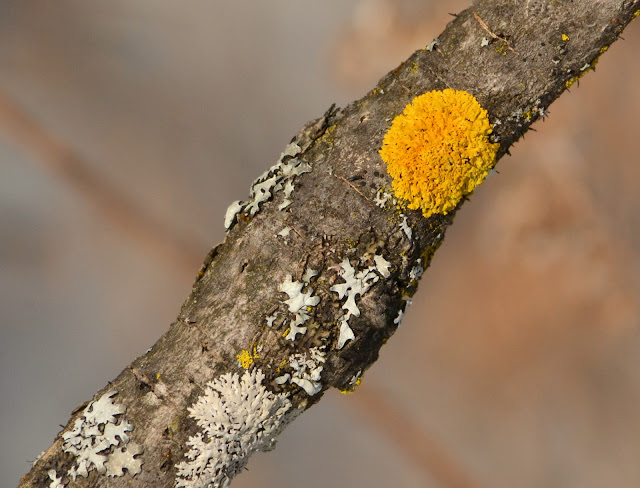 And I noticed the delicate tracings of some species of liverwort (genus Frullania) on many tree trunks: 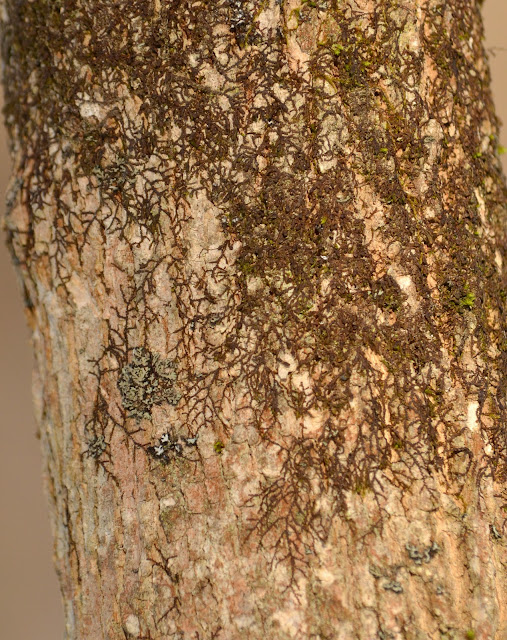 Here's a closer view of one of those liverworts; I wonder how long it took this tiny, tiny plant to grow to this size: 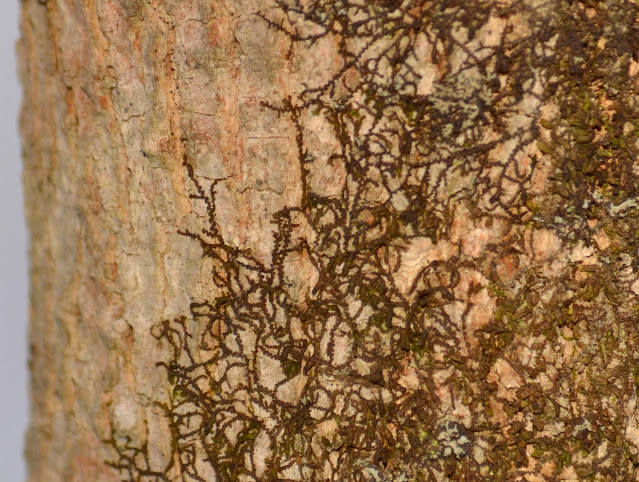 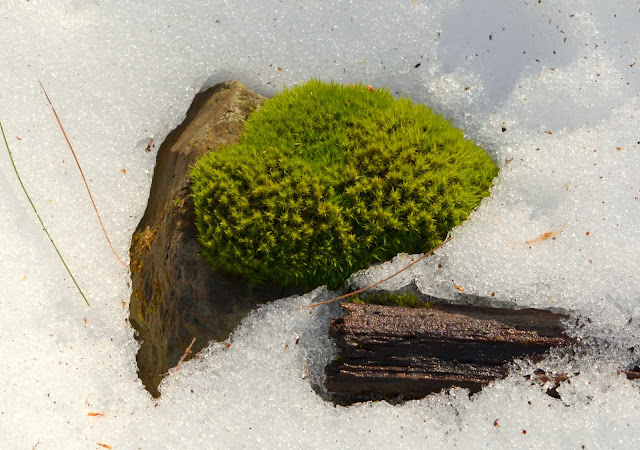 This Black-capped Chickadee was checking out tree trunks, too, and it perched for a bit on an old, thick Virginia Creeper vine: 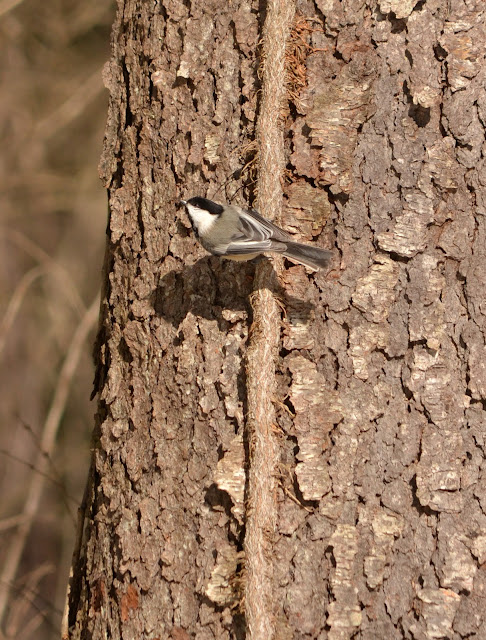 On February 27, I stepped outside the front door to see an immature Bald Eagle wheeling over the house -- what a big bird! 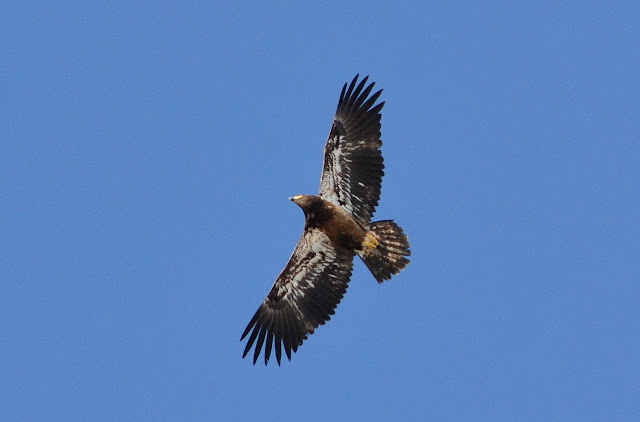 I also admired the sight of our Tulip Tree still carrying many of last year's dried seeds against the clear blue sky: 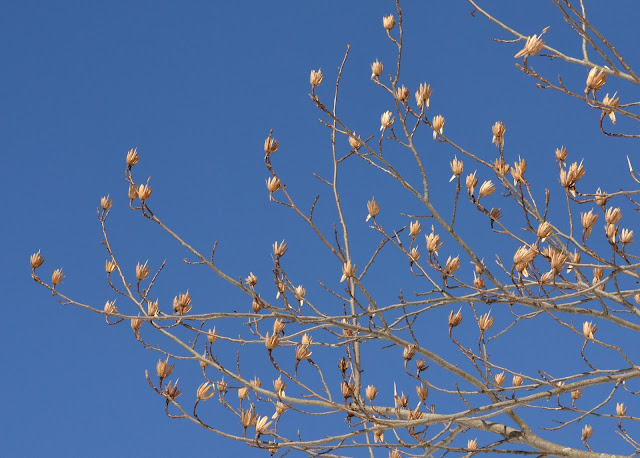 On March 5, there were hundreds of Snow Geese and Canada Geese streaming northward overhead in big flocks. Yes! Let the spring migration begin! I am so happy that our property is apparently right under a regular flight route, because I love seeing -- and hearing -- these travelers each year in early March. These flocks made such interesting patterns in the sky: 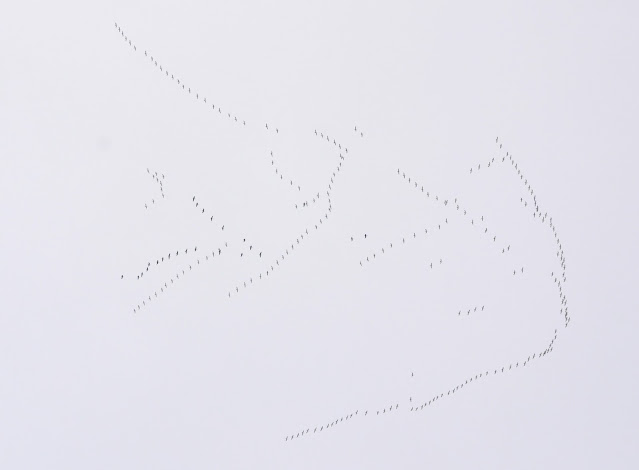 Here's another big flock, this one with all Canada Geese: 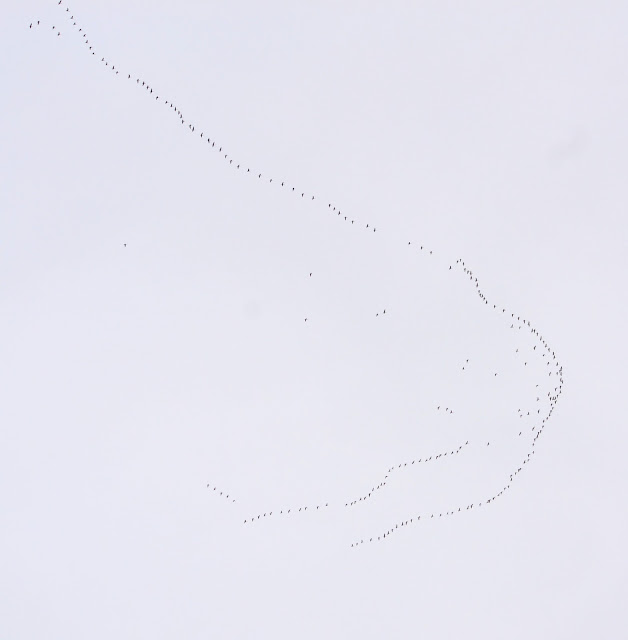 And here's a closer view of one of the Snow Goose flocks (with a couple of Canada Geese mixed in): 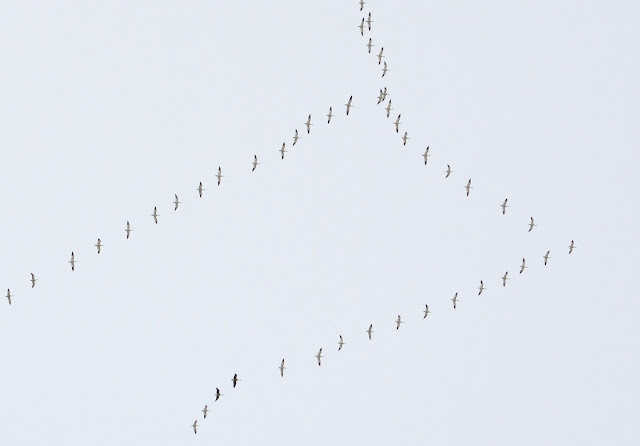 Meanwhile, a male Northern Cardinal sang out from the top of a big spruce tree in our meadow: 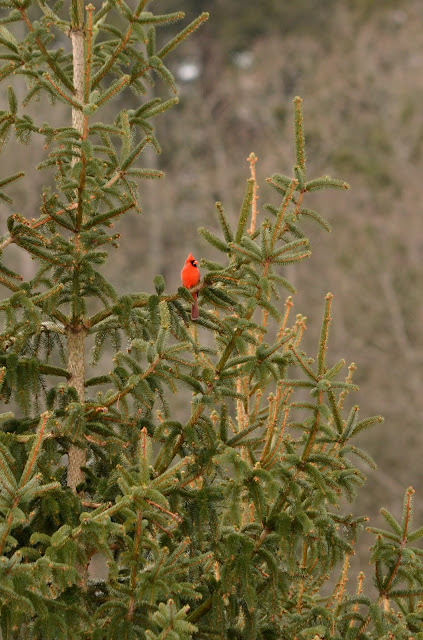 We've actually had a cardinal (or maybe more than one) singing around here since December this winter, which seems very strange to me -- I'm used to hearing cardinals starting up in February. I suppose they're really interested in establishing this territory this year. Go for it, cardinal! 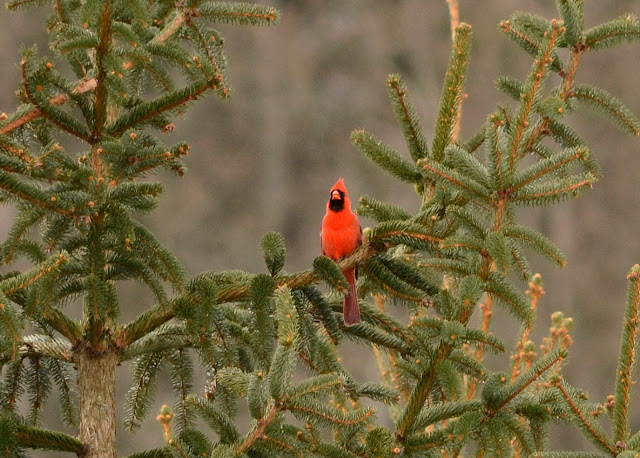 In early March, I learned that the Entomological Society of America has adopted "Spongy Moth" as the new common name for Lymantria dispar (formerly Gypsy Moth), and yep, we've got this moth's spongy egg masses all over the trees in our front yard, after this invasive moth's big population boom last year; here's hoping we'll see a decrease in their numbers this year:
On March 6, I got to see a couple more cool birds flying overhead on a sunny and clear day. This Cooper's Hawk crossed over our house a few times; I love those puffy white feathers at the base of its tail:
And it was wonderful to see a Turkey Vulture in the sky again after their absence during the winter:

A wet snowfall on the afternoon of March 9 made for a really pretty scene on the steeply sloped woods across the street from our house:
Here's a closer view into those woods:
Our first Song Sparrow of the year arrived in the midst of this snow, and it dug a hole at the base of the feeders and spent quite a bit of time feeding on dropped seeds there; I don't think I've seen a sparrow in a little snow burrow like this before:

What an industrious little bird. It flew from its hole to a nearby shrub a few times while I watched through a window, and I can't help thinking it looks super grumpy in this picture:

The next day, it was nice to see our newly-arrived Song Sparrow (the same bird?) in the sunlight:
This White-throated Sparrow also posed for bit in a tangle of wild grape vines:
In the woods, at least three recently awakened Eastern Chipmunks were scurrying around a snow-covered bank:
And perhaps because of the extra moisture from the melting snow, the various mosses and lichens on tree trunks in the woods were looking especially bright and verdant this day:
Here's another scene of tiny mosses and lichens among the crevasses of an old White Pine's bark:
Many of the trees had fuzzy socks made of moss:
And this moss almost seemed to be pouring out of this tree:
Back at the house, the persistent snow cover that's been around for months was receding, and our first Snowdrop buds were peeking through:
Then a storm brought another foot of snow, delaying things a bit.... But spring is certainly coming. Red-winged Blackbirds and Common Grackles are back in the area and singing, and as I write this, we're having a stretch of 60-degree and sunny days. Right now, I can see nearly equal parts bare ground and snow, I hear a Song Sparrow singing, and a pair of Eastern Bluebirds are checking out our nest boxes. The Snowdrops are uncovered again and I think they'll open today, our first flowers of the year. Here comes spring!

Posted by Elizabeth at 7:11 AM