I guess I've been on something of a bugs-in-the-garden kick recently. With the hot weather and long days, I haven't been making as many extended trips to the woods, and it's just so easy to bring the camera out to the garden and find crazy creatures there. So here's another garden-bugs post, featuring a new type of insect that I've just learned about, and which was making a strong presence in the garden this morning: robber flies. 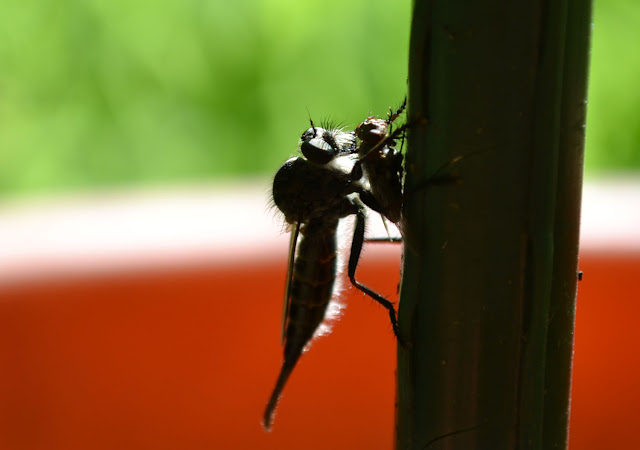 These are some scary-looking creatures, but the only things that need to be afraid of them are other insects, like the smaller fly being munched on in the picture above. Robber flies are hunters, zooming around and catching insects to eat. Apparently they can bite humans, but they'll only do it if you try to grab them -- and they don't sting, despite that imposing-looking ovipositor on the female (at least, I think it's a female) in this picture. This robber fly was pretty big, probably about an inch long. Also, I love the big fuzzy mustache on this girl, which you can see better if you click the picture to zoom in. 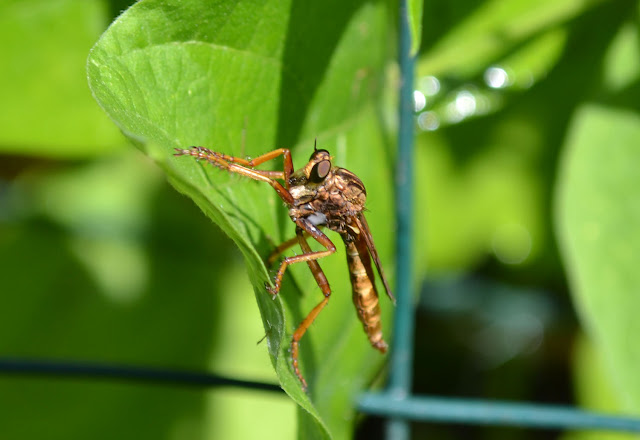 Here's another type of robber fly, even bigger than the first -- and I can make a species identification for this one: Asilus sericeus. I watched this fellow chase a medium-sized white butterfly around the yard for a minute or so (it didn't catch it), before it settled onto a leaf to clean itself. Do you see that little yellow knob-shaped thing just below the base of this creature's wings? All flies (order Diptera, i.e. "two wings") have those, and they're actually a modified second pair of wings, called "halteres," which help with balance and other important stuff during flight. How cool that this robber fly is so big, so I can actually see these funky little body parts clearly!
So robber flies seem to be pretty big-time hunters around here, but I don't think they're going to help me with these guys: 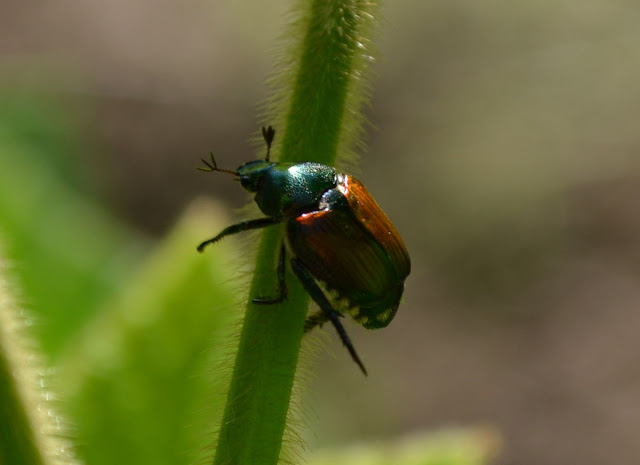 This is the first Japanese Beetle I've seen this year, and I'm crossing my fingers that I won't find too many more.... I think most people know about these bugs because they're so pest-y. They're a pretty good example of a species that gets introduced to a new place, finds itself without many natural predators, and then goes to town eating all the yummy plants in sight.
Still, I've found an overwhelming number of good/interesting insects in the garden this year, and relatively few harmful ones. Here's hoping the balance remains tipped in my (and my plants') favor!
Posted by Elizabeth at 4:51 PM